About the Friends of St. Andrew Bay

Home About the Friends of St. Andrew Bay

Formerly known as the Bay Environmental Study Team, or BEST, The Friends of St. Andrew Bay include all of the dedicated members and volunteers who help guide, support and implement our mission and goal.  We are a local non-advocacy, volunteer environmental organization that has been in existence in Bay County since 1987. Our mission is to evaluate the status of the St. Andrew Bay ecosystem, identify problems, and initiate corrective actions where necessary. Our goal is to maintain and restore a healthy St. Andrew Bay ecosystem for the benefit of all people. 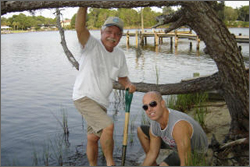 Over the years, The Friends of St. Andrew Bay have published a number of scientific reports and publications by our volunteer citizen scientists. One of our most dynamic and important publications is our ecosystem management plan, “The St. Andrew Bay Ecosystem, Our Environment” This document is the culmination of the hard work of many dedicated volunteers who have studied our local ecosystem and documented its characteristics. It tells us what we have ecologically in our community and, through our Action Plans, how to conserve and maintain what we have, and restore what we can.

The Action Plans found in the ecosystem management plan focus upon Bay County’s biologically diverse natural resources and habitat, as well as issues related to growth management; the impacts of stormwater and contaminants upon our bay watershed; and, efforts towards community education and outreach. These Action Plans form the basis of the work in our community and are achieved by our volunteers, The Friends of St. Andrew Bay. Our brochure, “Investing in the Future of St. Andrew Bay” details many of our programs and projects, and the people who make them happen.

Best, Inc. was incorporated in 1996 as a Florida not-for-profit corporation with 501(c)(3) status provided by the Internal Revenue Service. BEST, Inc. serves as the financial entity and receives and disburses funds in accordance with the purposes of grantsor donations in support of Friends of St. Andrew Bay projects. BEST, Inc. employs, supervises, and is responsible for the Administrative Support Team. BEST, Inc. is governed by its bylaws and the policies developed by the Board to implement the bylaws and conform to the state and federal laws that govern such a corporation.

BEST, Inc. Board of Directors

Larry Hawks was born in Miami, Florida and moved to Panama City in 1975 where he raised two children. Larry graduated from Gulf Coast State College and studied Environmental Resource and Management at the University of West Florida. After service in the military, he worked as the Environmental Coordinator for Bay County Public Works Department / Engineering Division. Larry has been associated with, and has volunteered with BEST and the Friends of St. Andrew Bay for some 20+ years. Larry’s hobbies are sailing, tennis and horseback riding.

Steve Haines was born in Panama City, but reared elsewhere, reconnecting with the panhandle in about 1975. He is an army combat veteran, and earned a Bachelor’s degree from Austin Peay State University in Clarksville, Tennessee and a Masters in Organizational Communication from Murray State University in Murray, Kentucky. Steve is a retired police officer, and owns two small businesses, as well as being Blog editor for Small Craft Advisor magazine. He is an avid sailor and beach bum.

Jill Blue Reich was raised in Panama City but attended high school in Fort Walton Beach so as to dance with the Northwest Florida Ballet. Upon high school graduation, she danced professionally with the Atlanta Ballet for three years before attending University of Florida. After graduation from UF 1997, Jill moved to Washington, DC where she interned for Senator Bob Graham and then worked for Science Applications International Corporation. Jill received her law degree from FSU in 2001. She moved to Savannah, GA where she obtained her real estate license then moved back to Panama City in 2004 and worked for Burke, Blue, Hutchison, Walters, & Smith, PA. After the death of her husband, Major Stephen Charles Reich, in Afghanistan, Jill began volunteering and contracting with BEST. She is also a member of the Kiwanis Club of Panama City.

Gregory Jones was born in Detroit, MI and raised in New England. After graduating from the University of Rhode Island with a degree in electrical engineering, he secured a position at the former Naval Coastal Systems Laboratory in Panama City, Florida. Working at the Laboratory in the ‘70s with two operating experimental stage platforms located in the Gulf of Mexico provided him many opportunities to explore the natural beauty of the region. After leaving Panama City for a number of years to live in the western US, he returned here several years ago. Greg is an avid outdoorsman and lifelong collector and restorer of antique radios, jukeboxes and TVs.

Ann Ruple was born and raised in Panama City, Florida, the sixth of 10 children. She graduated from the University of Florida (BA) and the University of South Dakota (MBA). Ann passed the Uniform Certified CPA exam as a first-time candidate. Her accounting/financial career foundation was with Price Waterhouse (now PWC) in Nashville, TN followed by work with a PWC client and other public and not-for-profit sector companies as corporate controller and Chief Financial Officer. Ann has been married to Steven since 1975 and has two children. Ann returned to Panama City from Connecticut in 2010 to spend time with her aging father. She grew up on St. Andrew Bay and has a keen interest in preserving it for the next generations.

The Friends of St. Andrew Bay Steering Committee is comprised of dedicated volunteers who guide and implement our mission and work towards our goal. They do these things by implementing the Action Plans contained in our ecosystem management plan, “The St. Andrew Bay Ecosystem, Our Environment”.  Action Plans are specific, steering committee approved projects or project areas.

Other activities performed by members of the steering committee include: